Inclusivity in 2019: Just Three Months in and Improvements Already Made 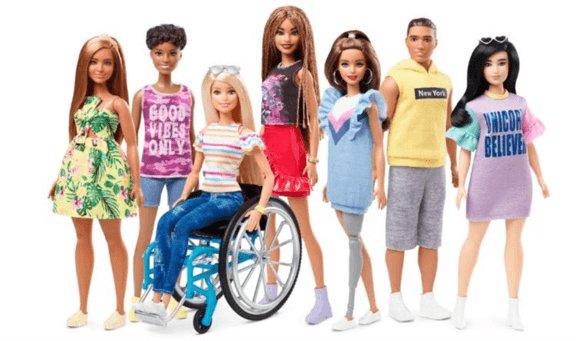 We’re excited to share three advancements in disability inclusion and representation for the year … and it’s only March!

Emojis are communicate without depending on language. As powerful tools of universal communication, they have become a part of our everyday life.

Unfortunately, until now, only a single emoji represented a disability. When considering there are 2,666 emojis, that vast underrepresentation is alarming at best.

Apple led the change by consulting with disability organizations to design emojis that represent different disabilities. The Unicode Consortium — the global organization that sets emoji standards — selected their 13 proposed designs. They are expected to be released to devices everywhere soon.

The criticism that Barbie-maker Mattel doesn’t represent what true women look like has been going on for decades. This year Mattel responded to criticism of misrepresentation by adding Barbie dolls with different body types as well as disabilities.

Two new dolls, set for release this fall, represent a disability. One doll uses a wheelchair, and the other has a prosthetic leg that is removable.

Jordan Reeves, a 13-year-old disability activist, collaborated with Mattel on the doll with the prosthetic limb. It was her idea make the prosthetic removable so it would be more realistic. By having toys that represent them more accurately, kids with disabilities feel included, accepted and understood.

It’s yet to be seen if Mattel will be modifying the dream house to be wheelchair accessible.

Thanks to the work of disability rights advocates, Major League Baseball has changed the name of the roster for players recovering from an injury. What was called the disabled list is now the injured list.

By renaming the roster to the injured list, it’s helping stop the misconception that people with a disability are injured and unable to participate in sports. Both major and minor league levels are adopting this change.